In 1960, in a climate of great economic growth, in Besozzo (province of Varese, Italy) , SAL was born. At the time, it was a small company but with a great dream that has materialized in over 60 years of experience that have made it a leader in the sector.

For the sixtieth year of its foundation, SAL decides to integrate the two owned companies, MS Engineering and CAPMAC Industry, thus creating a single production reality in the mechatronics sector.

In 2020 SAL, with the spirit of continuity and renewal that have always characterized it, changes its image and name becoming P-INDUSTRY. 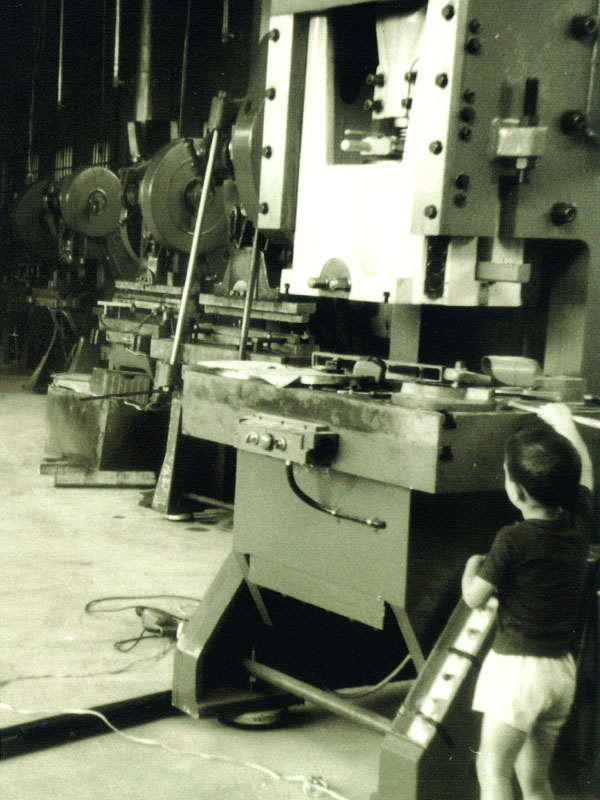 Foundation of SAL, a company for the production of refrigerated cells in Besozzo.

Plant expansion and installation of the first press.

First production for export and installation of the first automatic assembly line for hinges (household appliances).

Development of the technical department and opening of the workshop department for mold construction. First production with progressive mold made entirely by SAL.

Opening of the second plant in Comignago (NO). Creation of a production department with presses from 300 to 1000 tons.

SAL acquires company shares in a company of special machines and industrial automation. Start of SAL’s experience in the production and sale of the first industrial plants.

Founding by SAL of the industrial design office (MS Engineering)

SAL celebrates 50th anniversary of its foundation with these figures:

60th year of foundation of SAL. The owners, with the spirit and the will to pursue new goals, decide to give continuity to the work of sixty years and to merge the three companies of the Group into a single entity called P-INDUSTRY.

P-INDUSTRY PROJECTS IN THE WORLD.

P-Industry is proud of its successful history, during which each employee has always played an important and decisive role in the growth of the Company.

Our corporate values ​​are:

Customer at the center

P-INDUSTRY listens carefully to its customers to understand correctly their needs and to develop, through its technical knowledge, new ideas and solutions. We are aware of the high expectations from us and we ensure our contribution, committing ourselves to guaranteeing the highest quality standards.

P-INDUSTRY has created solid foundations over time, relies on a proven structure and brilliant collaborators who have helped it to create an independent and autonomous reality. P-INDUSTRY supports the freedom of initiative of its employees and directs strategic investment choices in favor of technological research and development and professional training.

The engine of our work is curiosity combined with the continuous desire to grow without being ever satisfied by the results achieved. The success of P-INDUSTRY is the result of the commitment of all its collaborators: thanks to the passion of each, innovative ideas are born and with the contribution and added value of all, they can be realized.

P-INDUSTRY knows that the company is like a team, made up of different people and understands that this is where the Group’s added value lies. The talent of the individual in P-Industry is valued in order to achieve the objectives of the team with respect for their individuality and personal growth.

P-INDUSTRY believes in innovation and technological evolution to increase the safety and quality of its products. Continuous research and constant attention to details distinguish our technology and our path.

In P-INDUSTRY , attention to the environment is central, both inside and outside the company. All our activities follow savings and recycling rules both in production processes and in finished products. Precisely because environmental awareness has always been at the center of the Group’s values system, the startup Ecodyger was founded: it’s the most modern and innovative solution to reduce organic waste by up to 90% of the original weight and volume.